Did you see 2007s Grindhouse in the theater?  I hope to fuck that you did. Im not sure how many times i went, but I know it was more than 3, less than 7…so lets say 5. the last 3 times were at the departed Granville 7 cinema. You had to see this place, i never saw more than 20 people show up for any screening, so the place always felt nearly deserted. it was dark, creepy, and felt seedy. Located at a spot downtown that could be either skeevy or decadent, depending on which way the wind was blowing, I don’t think anyone who entered Granville 7 was ever in any real danger of being mugged or raped, but there was that subtle vibe all the same…

This did wonders for the viewing experience! Here I was, paying very little money to watch a double bill of Violence, Gore, Sadism and Thrills, complete with shitty image quality, and ridiculous trailers for films that if they existed, i HAD to see! Sadly, this is as close as i would ever get to the Grindhouses of New Yorks 42nd street. Actually, that isn’t true, Vancouver still had The Fox Cinema, a XXX theater institution on Main Street. I had gone to the Fox several times, and soaked in(figuratively speaking at least…literally speaking was always a risk you took) the spectacle and the sleaziness of it all. On any given occasion, you could see what looked like deranged 80’s time travelling hookers nodding off in the seats and benches, creepy dudes doing their best Joe Spinelli in Maniac impression, shifty looking dealers offering even shiftier looking drugs, The occasional public display of fucking by patrons…which sometimes had other patrons lining up for their turn. And of course there was the gay cruising. Apparently there was a whole system of etiquette and codes associated with this, something about which rows you sat in and changing rows to express interest…I dunno, I found that if anybody made me any kind of offer i didn’t want, a simple “Fuck Off”, was enough to get them to leave me alone. Why would anyone other than a dedicated pervert (no shame, perv hard!) venture into this place? For the experience. Sure it was dirty, and skeevy and you can’t imagine what the fucking bathroom smelled like, but it had that element of danger that I crave in cinema.

Back to the topic at hand, Tarantino and Rodriguez gave me, and presumably others, a taste of something magical we had only heard about, knowing it was long gone and never to return. We wanted more! Why not a film showcasing franchise jumping Sheriff Earl McGraw? Maybe the Backstory of El Wray, that was only hinted at in Planet Terror? What about those incredible fucking trailers? Machete, Werewolf Women of the SS, Don’t, and Thanksgiving had me more excited for upcoming(?) films than i had been in years! Over the years since, I had heard various reports that these films may one day see the light of day. We saw Machete, which i felt lived up to expectations but i would have enjoyed more if it had a more degraded film look and DID NOT use a body double for the Lindsay Lohan nude scenes. We also saw the release of Hobo With A Shotgun, which started as a contest winning fake trailer, tacked on to later screenings of Grindhouse. Since then, there have been several new films that seem intent on capitalising on renewed interest in grindhouse style films. Astron 6 pretty much owes their careers to Grindhouse with releases like Fathers Day, Man-Borg, and The Editor. Other modern gems such as Dear God, No!, and Run Bitch, Run! bring the goods and wrap them in a vintage grimy package…there are tons more, keep your ears and your eyes open.

Im currently in talks with several other like minded fellows to put together a proposal and acquire sponsors to rent local theaters with a certain “Charm” to host regular Grindhouse nights, complete with trailers, double bills, buckets of bodily fluids and every manner of chills and thrills imaginable. We’ll never be able to go back to the Glory days of old, sensibilities have changed, and the world of Cinema has moved on. Grindhouse Cinema died young, left a ragged but slutty looking corpse, and was buried by the mainstream. But dammit, we might be able to bring it back for a few nights at a time. It won’t be easy, but if enough of us demand it, then our voices will be heard by someone determined to make a buck off of us. Don’t get me wrong, the Multiplex and Blu Rays might be enough for the majority…but it’s not enough for me. I want my films to be dangerous again. I want an Exploitation Explosion! I want a new rise of the Nasties! I want to go back to the Grindhouse.

Is it even possible to do a found footage film anymore without including the Supernatural, or Bigfoot? These two subject have pretty much dominated the medium in recent years, and aside from creative standouts like the VHS series, most filmmakers seem content with this route. I’ve reviewed a total of 3 FF style ‘Squatch-fests for this column, and for the most part, they tend to be the same. A small group goes looking for Bigfoot, stumbles across him, still acts skeptical, runs, cries and films in equal measure. All of these films seem to offer more questions about Sasquatch than answers, and heaven fucking forbid we get a good look at the beast! That is, until Eduardo Sanchez returned to the woods with his camera to remind us all how it is done. 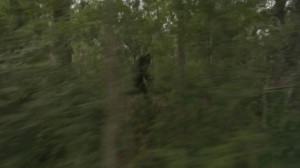 Sanchez, after co-directing and writing The Blair Witch Project, is Found-Footage Royalty. His work on BW, VHS2 segment “A ride in the park”, and now Exists, shows a skilled hand at work, maximizing the medium and adding believability and practicality to the shots. It makes perfect sense that our camera-man won’t stop filming, He set out to make a “kick-ass YouTube video”, so his handheld is constantly running, and Go-Pro cameras are strapped to nearly everything that you could think of. 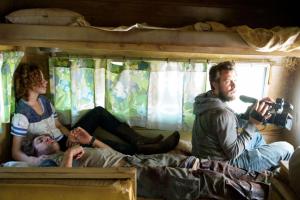 The best and worst of Sasquatch films often has the same problem, The creature looks like shit. Not only does Exists bring a realistic, believable looking Sasquatch to the screen, but they let us see juuuuuust enough to appreciate the design, and to keep a bit of the mystery. This is a beast that is fast, brutal, and intelligent. Fully capable of stalking us and killing us 1 by 1. If you haven’t seen the film yet, I strongly suggest making a point of doing so. I enjoyed the hell out of it, and I’m confident you will too.