I reviewed Pieces last year, and I’ve likely watched it at least 8 times in between then and now. Any film with the balls to carry a tagline like “You don’t have to go to Texas for a Chainsaw Massacre” deserves to be viewed as often as possible.

It could easily be said that Pieces is a train wreck of deficient characters spewing brainless dialogue in a wretched execution of filmmaking chock full of horrendous acting, atrocious dubbing, arbitrary situations, excessive nudity, and sexual overtones topped off with gratuitous bloodshed with the most painfully obvious red herring in film history…and you’d be totally right! That’s the charm of this prime piece of Grindhouse shit, it’s horrible in almost every way you can measure but thats what makes it so goddamn fun! 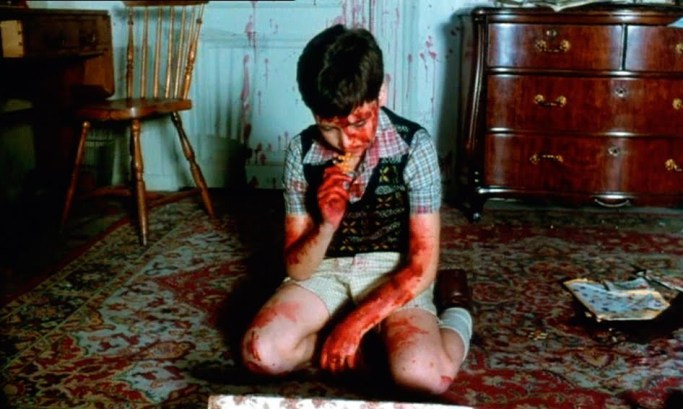 Young Timmy is painstakingly assembling a puzzle showing a naked lady, before his Man-hating domineering Mother puts a stop to this while cursing he and his Father before him for being dirty little penis monsters or something. Timmy reacts how any kid would and hacks his Mom up with an Axe, then finishes his puzzle, hides in the closet, and blames the murder on…some guy…it’s seriously the flimsiest of alibis. Fast forward 40 years, and we are introduced to a mysterious figure clad in black and dismembering co-eds with a chainsaw. Timmy seems to be all grown up and back to his murderous ways…but who is “Timmy” now?

What follows next is a string of awkwardly dubbed, clumsily acted and hilariously written scenes depicting idiotic police work allowing the campus Casanova to assist the investigation by teaming him up with a famous female tennis player who also happens to be a police officer, an inhumanly strong groundskeeper, and the most random Asian stereotype in history. I could try to describe more of the plot, but since it’s all nonsensical… Why bother? Whether it was intentional or freak happenstance, Pieces reminds us that sometimes being entertained by erratic fun is all you need, just as “The most beautiful thing in the world is smoking pot and fucking on a waterbed at the same time”.